The NWI Times: High school students learn first-hand about careers in the trades 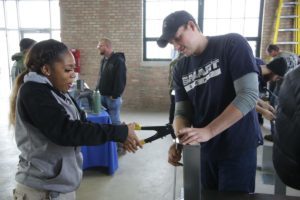 High school students from across Northwest Indiana got a chance Tuesday to trowel mortar onto bricks, balance on steel beams, haul dirt with a virtual excavator and fashion their own metal toolboxes.

More than 1,300 students from 30 schools in Lake, Porter and LaPorte counties attended the second annual Construction & Skilled Trades Day at the Lake County Fairgrounds in Crown Point. About 15 different unions were on hand to teach them about careers in the skilled trades, and the paid apprenticeship programs they would have to go through.

“We’re going to do this annually now,” said Kevin Comerford, director of professional advancement for the Portage-based Construction Advancement Foundation. “They’re doing hands-on demonstrations for the kids to get them interested in trade careers. They get to put their hands on the work these trades do.”

Apprentices who themselves recently graduated from high school showed juniors and seniors how to use screw guns, drive tri-axle dump trucks, insulate pipe and more.

“It’s very cool for them to see the young apprentices who are maybe a year or two older,” Center for Workforce Innovations Communications Manager Barbara Grimsgard said. “They can relate. It makes them more comfortable to ask questions.”

The Construction Advancement Foundation, Northwest Indiana Workforce Board and Indiana Plan for Equal Employment staged the event, which grew significantly after attracting 800 students in its inaugural year in 2017, said Sandra Alvarez, senior associate for employer engagement for the Center for Workforce Innovations.

“We’ve done a lot of marketing with the teachers and counselors,” she said. “We saw success last year with students applying to the trades themselves. We’re seeing outcomes, some movement there. The electricians said some of the apprentices, when asked on the application form how they heard about them, said they met someone at the construction and trades expo.”

Eighteen students who attended Construction & Skilled Trades Day last year ended up applying for apprenticeships with the International Brotherhood of Electrical Workers union alone, Comerford said. He said they plan to do expos in Gary and LaPorte as well.

Dale Newlin with the Indiana, Kentucky and Ohio Regional Council of Carpenters said many students have no idea what the trades do.

“Everything we do is either flying at you or sharp,” he said. “We’re giving them a handful of screws and a screw gun and having them put screws into drywall. It’s a hands-on look at what we do. There’s a lot of work in this area for interior systems — metal studs, drywall. It’s huge.”

Mark Kara, assistant coordinator with the Local 150 Operating Engineers, said the expo was part on an ongoing statewide effort to educate kids about career opportunities that do not require four-year college degrees and tens of thousands of dollars of debt.

“The nice part about it is they’re all earn-while-you-learn programs,” he said. “We have shortages in the workforce, especially in construction. There’s a lot of opportunities.”